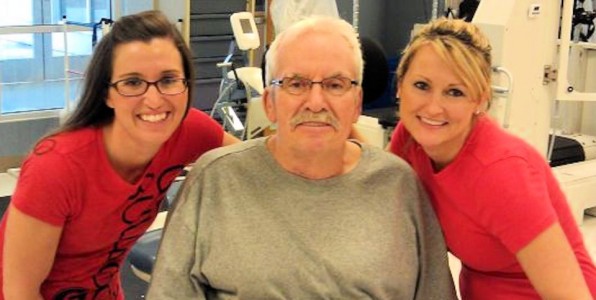 While I was in the VA Hospital in Augusta, GA, I was visited by Mr. Bill Lawson, a columnist with the PN Magazine, a publication of Paralyzed Veterans of America (PVA).  I recently learned that in the February, 2012, issue he retold my story in his article.  I would like to share it with you.

In October, I traveled to Augusta, Ga., for a check presentation ceremony. Our good friends at Agility Defense and Government Services Company (Agility) who have been involved with us for several years are now raising funds to keep our Voc Rehab Program growing. Agility’s vice president, Rich Brooks, made the presentation and reaffirmed our partnership to secure employment for every disabled veteran. Our mutual goal is to provide these disabled veterans with a “fair shot” at the American Dream: a good job at a good company.

As it turned out, this trip became a win/win situation. It has been my practice to conclude my PN articles with an appeal to readers to visit a hospitalized veteran. Often the stories you hear will be inspiring and uplifting.

So, while in Augusta, it seemed only natural to visit with some of the patients at the VA SCI Center. One veteran I had the honor to speak with did inspire me…so much so, I felt compelled to share his story with you.

Immediately following this man’s injury, he was sent to Shepherd Center in Atlanta. Shortly after that, he was admitted to the SCI Center in Augusta. Regardless of his initial rehab at the Shepherd Center, he was considered a new injury as far as VA was concerned. He was assessed, and his rehab program was put into action.

At first, I didn’t realize I was talking to a celebrity. His name is Alex Beaton. Perhaps some of you have heard of him. Beaton is a Scottish, guitar-playing folksinger, internationally known with more than 20 albums to his credit. But you would have to put to one side his stature in the field of entertainment to discover the most impressive and inspiring “twist of fate” that led him along the road to this SCI Center in Augusta.

His story begins in Scotland many years ago. Beaton told me that as a small boy, he dreamed of becoming an American citizen. When he was old enough and financially able (in 1965), he immigrated to the United States, the land of his dreams. His mother voiced strong concerns about his living in the United States and potentially being drafted into the U.S. military.

For those of you who are not aware, during the days when the draft was in effect, if non-citizens lived in the United States for a certain amount of time, they became eligible for the draft. With the Vietnam War escalating, Beaton’s mother became alarmed and expressed her desire for him to leave the United States to take up temporary residency in Canada. Since his hope was to become a U.S. citizen, he elected to remain in the U.S. and “do his part” perhaps expediting his citizenship…the one thing he always treasured. He did indeed serve in the U.S. Army, entertaining troops in the Third Army Soldiers’ Show and the Seventh U.S. Army Chorus in Germany.

So, “flash forward” and as sometimes occurs in life, that “twist of fate” materialized. Beaton recently sustained a serious high-level spinal-cord injury resulting in severe respiratory complications. He is undergoing treatment in the VA Medical Center where I came across him on my visit. Although currently unable to perform, he is determined to make a full recovery, indicative of his spirited attitude.

In an age where it is fashionable to “trash” the United States and cite everything that is wrong with our country, I met this wonderful man, determined to overcome his medical problem and still immensely proud to be an American, still extolling the virtues of “his” adopted country.

How is it that this man, by his story, makes me super proud to be an American? Like most of you, I served to preserve the freedoms we enjoy here today. These freedoms are still attracting to our shores thousands who appreciate what our country has to offer.

So, once again, I invite you to visit a hospitalized veteran today. Who knows, you may discover another Alex Beaton ready to enrich your life and inspire you to greater patriotism!

For many years, my husband and I went to the Orange County (California) Scottish Festival for two main reasons: to hear Alex perform and to eat bangers with mustard, grilled onions and beer. (We also enjoy the massed bands and the Drum Major competitions) We miss you terribly, Alex & wish you well on your journey back to health. God bless you and your wife, Alex & haste ye back to California’s Orange County Scottish Festival!

Checking in on you and praying for your rapid and continued forward progression to your recovery. We have missed your music, your humor and your presence. God bless and keep you strong Alex and Linda.

Our prayers are with you alex, try as they might it just is not the same without you at hte games. Wishing you well and waiting for your return!
Tom and Keri Harrington

Alex, “Alec” as we always call you, my father, sister, and I have been going to the Orange County Fair to see you perform for many years now, and yes, you were the highlight of our experience every time. We still listen to your music all of the time, but miss your wonderful stories. I would love you to come back to CA one day for a visit. Much more than a great performer. Our one family tradition really came about because of You. God Bless and Thank You for serving our country. I truly mean that. – Joanna (and the Galindos – Yes, not Scottish)

We will forever be grateful we met Alax at the Scottish Games in Phoenix AZ. From our first meeting we knew he had a special talent, not only the delightful ballets he sang but the love he had for all his fans. Thanks always Alax. The tour we took with you to Scotland is still our greatest joy. You are always in our prayers. Dale and Gerry Copsey

Alex, I’ve had the pleasure of seeing, listening & toasting to you for many a year at many a festival & concert. It was with anticipation of seeing you perform that motivated me to Sail back across the Catalina channel to catch your performances at Coast Mesa during Memorial Day weekends. To me you are the Greatest Scottish singing Bard of our Times. Thanks for those Memories…
My Prayers & Thoughts are with you, Linda & the Girls, Keep Healing… Highland Lad.
From one Veteran to another, God Bless…
Slainte !!!

Alex,just a few days ago I saw Steve Brinson and Greg(Dr Fuse) Robertson-both Soldier’s show alumni. We reminisced about what a great stage presence you always projected. as you continue your recovery know that you are always in our thoughts.

Great story! I’m with you all the way as you fully recuperate and perform again. My sister Jeannine and I were on your Scotland Tour in 2009, and we went all over in a great bus, seeing sights we are still talking about, all along serenaded by you and other great Scottish musicians. A Fantastic Trip ! Thank you, and speedy health to you, from one military vet to another … keep up the good work. Fondly, Hap and Jeannine

Hi Alex,
I think it was almost 20 years ago that we met at the Plesanton Games in California when my daughters were in their teens and yours just youngsters. Reuniting here in Colorado at the Longs Peak Games 10 years ago was a lovely surprise!
You have indeed been in my thoughts and prayers, as well as my husband John’s, these last years. We will be at the games this weekend missing you but with thankfulness for your spirit and continued gifts to us all. God bless you and Linda!
Nancy & John Thompson

Alex,
I have enjoyed your shows for years at Mesa, AZ. I wanted to send my wife and my own prayers for your recovery. My family spent many times enjoying your shows and you music.

Look for ward to seeing you again.

Alex, We met you 20 years ago this month at the Virginia Highland Games when my extremely pregnant self marched up and asked you to meet my 8 year old son who was a great fan of yours. We were friends for a long time after that and visited whenever you were in Virginia. Well, that 8 year old is now 28, the girls are 25 & 22, and that baby is a 6’3″, 20 year old college student! We pray for you on a regular basis and would love to see you again. Take care, my friend and keep faith.
DeLane Califf

I believe I have all of Alex’s CDs and videos – so I listen to his beautiful recordings daily as I keep him in my prayers. Since my husband was in a power chair handicapped not quite as severely as Alex, I can certainly identify with what Alex, his wife and family are going through. May God bless him with recovery and peace.