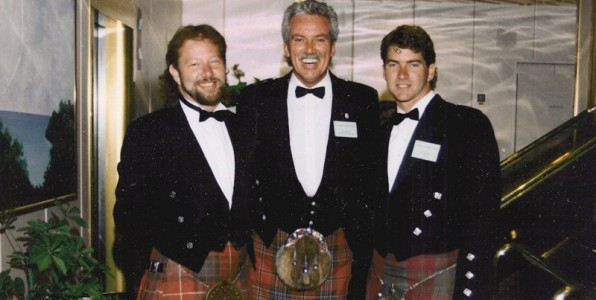 This double CD was recorded at the annual Memorial Day concert, preceding the Scottish Highland Games and Festival held at the Orange County Fairgrounds in Costa Mesa, California.

With me, on this magical night, were my good friends Alasdair (“Titanic” “Last of the Mohicans”) Fraser, the master Scottish fiddler, as well as the world’s most recorded piper, Eric (“Braveheart” “Titanic”) Rigler.

This production was recorded a few years ago and, at the time, I was really enjoying recording in the studio, so this project was shelved. The concert was recorded by Dick McIlvery, who always believed that there was something special about this live performance and sent a few sample tracks to my wife Linda. This is how she described her experience as she listened:

From the moment I began listening to the CD, I was transported into the audience and could quite easily and vividly picture Alex on stage. I could just see him grinning from ear to ear with his dimple prominently displayed on his chiseled face; see him with his kilt swaying as he moved to the music coming from his guitar and hear that baritone voice singing with so much feeling.

I felt his energy and passion for his country, his music and the audience. I was totally enthralled to once again feel the synergy created when he performs with Alasdair and Eric. I realized that this may be the last time I will ever have the chance to “see” him perform his unique brand of musical magic again.

It was at that moment that I KNEW he must produce this album for his many fans and friends around the world. After all, everyone should have the opportunity to experience what I experienced, and to know that they could always “see” Alex in concert whenever they wanted to. ~ Linda Beaton

My friends, I’m extremely pleased with how this production turned out. It’s a full two-hour concert with a lively audience that will make you feel a part of that special night. Please go to my store (or just click here) to order your copy, and while you’re there, think of your family and friends.

I know you’ll really enjoy listening to this concert production as much as Alasdair, Eric and I enjoyed performing together. Oh, and don’t miss that rousing rendition of “Scotland the Brave”. What a night it was! And what a wonderful memory it is for me.

PS: You can by it here: Live In Concert

Hi Alex,
Looking forward to the live concert CD. It must have been a great experience with Alasdair and Eric. God speed my friend!!

Alex told me the CD was in production. Knowing I am a guitar player, he also downplayed it in typical Alex fashion by saying how he might have been tuned better, wasn’t exactly satisfied with the sound, and blah, blah, blah! Give me a break!
He sent me the CD and it was absolutely fantastic (as I knew it would be)! A great recording with incredible talent on all fronts!
Thanks for producing this and it will be cherished along with my other worn out CDs of yours where I have beat them against my head trying to pin down that wonderful flowing guitar style of yours that I have always admired and will enjoy for years to come!
All of us who have been fortunate enough to be a part of the music of the Highland Games and better yet to actually get to share a stage with you owe you a great debt that can never be repaid!
Thank you my friend!
Scooter Muse

For a mind befogged by time and ale, there is nothing so precious as a memory recaptured. I had almost forgotten what a fabulous guitar picker Alex has been, and this comes through wonderfully in this concert recording along with his singing. There are the masters Alasdair and Eric, there as well is Alex with his ever-present smile and brio, improvising his music hall interplay with the audience. I remember those concert nights–like Willie departing for Melville Castle, we were “young and blithe and bonnie”. In the music I see the faces of many old friends, chief among them my old pal, Alex.