Personal sadness in this time of crisis

Hoping this finds you and yours well and healthy in this time of crisis. Please wear a mask and stay safe!

It is with heavy heart I give you an update on our daughter-in-law, Stephanie (our grandaughter Maggie’s mom) 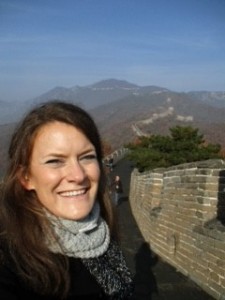 On the 5th of July, Stephanie Polston, passed away from complications of ALS. She was 32 years of age. Stephanie was diagnosed with ALS in April of 2019 and not only did she contract this terrible disease, but she had the most aggressive form of it – bulbar onset ALS; taking her life fifteen months later.

After graduating with a B.F.A. in Art Education with a minor in Art History, Stephanie taught K-12 Art for 5 years before transitioning to a position in Corporate America. While teaching Art at the high school level, she organized a tour of Europe for a group of her students. The success of that tour resulted in two subsequent and larger groups of students returning to Europe for the next two years. Due to her success, the company she worked with to “host” the tours invited her to speak at their Annual Conference in London and also gifted her with a tour of China.

In 2016, Stephanie wanted to leave teaching though the Principal at the high school she worked at asked her to stay with the hope that she would take over his position in the future. Stephanie loved challenges and wanted to try her hand in the corporate world so my wife, Linda, helped in setting up interviews at Centene Corporation where both she and John worked. Stephanie had three interviews and three offers! Her first positions at Centene was a Curriculum Designer which she held for less than a year before she was promoted to a Senior Learning Consultant. She had a bright future ahead of her and we will always wonder how far she could have gone; she was unstoppable in everything she set her mind to!

Stephanie married her soul mate, John P. Polston (Linda’s son), on October 3rd, 2015 and they welcomed their daughter, Maggie James, into their lives on July 17th, 2018. Stephanie and John were together for over 12 years. They met originally in 5th grade and then started dating when they were 19 years of age. Stephanie kept a diary in 5th grade and shared a page out of it with John years later; she’d noted in her diary that she’d met her future husband!

From a young age, Stephanie had a feeling that she wouldn’t live to an old age and decided there and then to live each day to the fullest; she kept that promise to herself and left this world having met all the goals she set for herself. I don’t imagine there are many people who can say that about themselves. 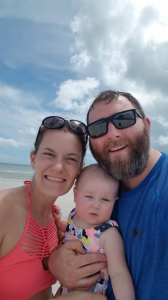 Like Stephanie, Maggie adores the outdoors; John, not so much so. One of the goals Stephanie had was to take Maggie to a beach by the sea. Linda’s sister, Joan and her husband Jim, have a beautiful rental home in Cape Coral, Florida which they graciously opened to them. John, Stephanie and Maggie were able to have a wonderful week a year ago enjoying the beach and the warm waters of the Gulf of Mexico.

It was terribly sad to see the decline over the months: Stephanie losing the ability to walk, the use of her arms and hands, being unable to swallow and unable to talk. Knowing that she might not make it to Maggie’s second birthday on the 17th of July, we celebrated it early on Saturday, June 27th. It was a wonderful celebration with family and friends. There were a lot of little munchkins, but Maggie stole the show with her entertaining and antics. Stephanie enjoyed herself and there were plenty of moments of good laughter and cheer.

We will miss Stephanie every day of our lives and are determined to do what we can to ensure that Maggie grows up knowing her mother and becomes a well-adjusted young lady. 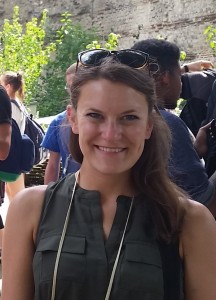 Stephanie began her career teaching art in the Warrenton Mo R III School District and later, at both Ft. Zumwalt West and Ft. Zumwalt East High Schools. She continued her career as a Curriculum Designer and Learning Consultant for Centene Corporation in Clayton, MO.

Stephanie married her soul mate, John P. Polston, on October 3rd, 2015 and they welcomed a daughter, Maggie James, into their lives on July 17th, 2018.

A Celebration of Life will be held privately by the family. In lieu of flowers, Stephanie asked that any donations be directed to her daughter, Maggie’s, college fund. The family very much appreciates it! Please make checks payable to “College America” and mailed to 3120 Tamm Ave., St. Louis, MO 63139.

I first met Stephanie at Alex and Linda’s wedding. I enjoyed being around her and hearing her thoughts on life in general.

I next saw her at the hospital the day after Alex’s accident. We talked at length in the cafeteria while John Pat and Linda were with Alex. I learned that she was a gentle soul and loved John, Linda and Alex very much.I have thought of her from time to time after learning of her illness.

While it is always difficult for a child to loose a parent, it is heartwarming to know that little Maggie will always be a loving memory of Stephanie for John, Linda and Alex to cling to.