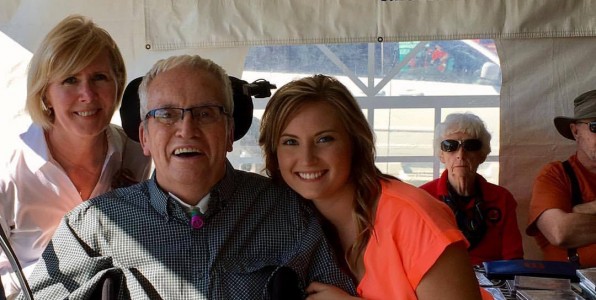 It has been my intention to bring you up to date on what has been going on with me long before now.  Unfortunately, I’ve had a series of serious setbacks since late April when I went into the VA for a routine colonoscopy.  As I mentioned in a previous message, the prep work went horribly wrong and resulted in me being placed on a vent with a trach in my neck.  Though I’ve spent some time off the vent (which as of now, I’m on only during the night), I have been unable to progress far enough for my pulmonary doctor to feel comfortable removing the trach.

As a result, I was unable to attend Grandfather Mountain Highland Games in July. Fearing that I was getting ill, I had to cancel my appearance. Oddly enough on the opening day of the Games, July 6th, I was in intensive care with a severe case of pneumonia.  According to my doctors I was not responding to treatment. Linda told me later, after my recovery, that when she arrived at the hospital, Dr. Lippmann, my pulmonologist, was as white as a sheet. Our friend, Terri Nowell, a physician’s assistant, had tears in her eyes. Well I pulled through, only to be hit with another bout of pneumonia a month later, on August 7th and have been admitted to the hospital two more times since then. I was very concerned about how weak I was and was told it would be two to three months before my strength would come back. Now after three months I feel stronger although my voice has deteriorated in volume and is very limited in range.

On a brighter note, the last Saturday in September, our local Highland Games here in St. Louis was held; it is only fifteen minutes from my home. Several of my musician pals were performing and I was able to spend four hours at the folk music tent. Some other friends came to visit from Minnesota, North Carolina and Tennessee. The following morning, after a good night’s rest, we had 12 over for breakfast. A good time was had by all and it was great medicine for me.

Though unable to perform these last six and a half years, I am extremely fortunate in having loving friends who sell my product at several games around the country. I am forever grateful and love them very much.

I am also grateful for the friendship of a retired Missouri State Trooper who visits me twice a week. He is a volunteer through the VA network and we have become friends.  I have indoctrinated him into the joys of football (soccer). So much so that he screams at the referees for bad calls and at the players who frequently dive and feign injury. Fortunately, his language is tolerable to my virgin ears.

Ashley, my nursing student caregiver continues to be a joy to both Linda and I.  She’s been working for me for 2.5 years now and living with us for the past 1.5 years.  She’s smart, funny, dedicated to her craft and cares for me like I’m part of her family.  It’s been a joy watching her nursing skills develop over time; she graduates in April and we don’t know what we will do without her.

Now, let’s move on to my favorite subject, SALES OF MY CD’s and DVD!  Many of my CD selections are available in hard copy.  My DVD features three full-length musical, historical and travelogue productions. They are hosted by yours truly with ten songs on each program. It’s around this time of year that I watch it over and over again. You too can enjoy this pleasure for yourself or a Christmas gift for a friend.  All right here in the Beaton Store.

I have no idea where this shameless peddling comes from?  With my mother being born in Northern Ireland, perhaps it’s the Irish patter that assists my father’s Scottish side to reel the funds in.

Wishing you a wonderful holiday season and a new year of good health and happiness!

Continue to improve Alex. I met you at Lorin and Liz’s wedding a while ago. Hope you get stronger, and better as the days go on. Best to you and Linda from Palm Desert, Ca. Have a good holiday season.

Miss you and praying for your recovery. I am binging on your CD’s.

We love you Alex!
Merry Christmas!
Joy throughout the holiday season!

Alex, you are dear to so many of us, and we are keeping you in thoughts and prayers. I met you at the Grandfather Highland Games in 1992 and 1993, as well as the Southeast Florida Highland Games in the mid-90′s, not sure which year (after the hurricane that trashed the grounds before the games in the mid-90′s, not sure which year, but Eric Rigler and Bonnie Rideout were there). I just wanted you to know that you are very admired and loved. You are a gift to this world. Thank you!

Alex, we wish you happiness and strength this holiday season, and always. I first saw you perform each year at the Costa Mesa games in the 1980s, and then after my wife and I moved to Virginia in 1994, each year at the Virginia Scottish Games. One year there, our children and we were listening to your performance and you were giving away your children’s music CD, and you asked if we wanted one and we replied “thanks, but we already have one.” You exclaimed, “Now those are my kind of people! You can tell they love their children!” That’s one of many fun memories we have of you, alongside the many musical memories you’ve shared with us. We’re listening to your Christmas CD once again this holiday season. Please know that my family and I are just one of the many thousands who continue to be grateful for your ongoing gifts of music, laughter, and inspiration! Our best always to you and your family — Jim Alverson (& the Alverson family)

We think of you often. Best wishes to you and yours, Alex.

Happy New year, Alex. I haven’t been at many games in recent years except the ones near Knoxville. Still working full-time as an insurance agent and living near the mountains. Have been following your progress and keeping you and Linda in my prayers. I do hope I can see you all again at some point. Always remembering you with fondness. Love, Coleen

Sending best wishes from your old
next door neighbour in knightswood.
I hope that you continue to improve your health Alex.

Alex, I continue to hope and pray for you to recover. I have many wonderful memories of your visits to Alaska. The first one was on my birthday. My wife and I moved to Maine in 2006 and now we live in Virginia. I hope I run into you at a future highland games and share a wee dram with you. All the very best my friend.

Dear Alex, we miss you so much! My family and I attended the Scottish Festival on the Queen Mary last weekend and it just isn’t the same without hearing your voice and lovely music. Please continue to get better and stronger and we hope to see you again the in the future.

Alex, hang in there and continue to improve. Looking forward to the Enumclaw Highland Games. I can volunteer to help with sales at least one day, and maybe more. You may reach me at 253-273-5877. I also am able to receive shipped items, I will give you my physical address, if needed. We also have a renaissance fair that runs over several weekends, and is well attended. No held at a farm in Bonney Lake, not far from Enumclaw.

I wish you well….from a fellow Scot from Aberdeen! I have tolerated your jokes about folks from the North East, but never understood why you did not make a CD about the Bothy Ballads.

I enjoyed yor concerts at teh Stone Mountain Highland Games!

I was Frances Crews partner of 44 years. She was the Washington state regent for Clan Douglas for 25 years. We first met you in Estes Park in 1992. She collected hugs from you over the years at Albany and Portland, OR Enumclaw,WA and Pleasanton,CA. Frances religiously listened to your tapes then CD’s in her car for a decade as she commuted to visit her patients on her home health hospice route. I recently gave her Douglas tunic to a friend. For years it sported a big button with your smiling face. Fran stated it would never be removed as Alex had pinned it on her. Yesterday I burned a CD to be played as back ground music after her service during the pot luck luncheon. It features her favorite gospel tunes and of course 18 of Alex’s selections. We all love and miss you so much.
Thanks for the memories over the years.
May God Bless you and keep you safely in his arms.
Gary Cosgro

You played at my wedding with Jennifer Johnstone, daughter of Bill Johnstone head of the Scottish Heritage Highland Games at Devenshire Downs every May each year back in 1984. We all used to come and see you at Bob Burns in Warner Center. My Mom had a great Crush on you for years! I’ve always thought very kind of you and hope you are well! I’ve always thought of you as a friend, even when we payed soccer against each other at the park! Best of wishes to you and yours! Love Mark E. Mac Millian (Wampler) Loard of the Isle of White!

Alex, I hope to God your health is improving. Having met you via SASSF. Highland Games, we all miss you.