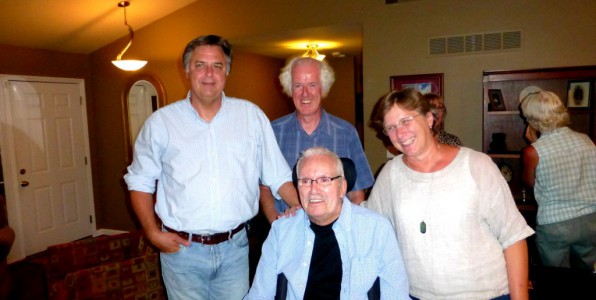 As many of you know, this past weekend was the weekend for the St. Louis Scottish Games.  As in previous years, many of Alex’s friends and fans converged in St. Louis to again see the man that has brought us all together.  (You remember that last year at this time Alex was fighting for his life at Barnes Jewish Hospital.  What a difference a year has made!)

Beth Arnold, Alex’s longtime friend and sales person extraordinaire, Amy Brady, Sharon Campbell and I had dinner with Alex and Linda on Thursday night.  I was immediately struck by how good Alex sounded.  His voice was strong and clear he was in very good humor.  On Friday, we gathered at Alex and Linda’s to help prepare for the Sat night Ceilidh.  After a delightful lunch at McGurk’s Public House we headed back to Alex’s where Alex and I got some Bro-time while Linda and Beth did some grocery shopping.  I’d like to say we spoke of worldly problems and our past conquests; however, in truth it was quite trivial though satisfying just to get to talk with my friend face to face.

The Games on Saturday started with a big blue sky and promise of moderate temperatures.  This year the Games moved from the lovely Forest Park location to just off of the Spirit of St. Louis Airport.  So the background was small aircraft traffic along with helicopter maneuvers and the occasional military jet fly by.  On the positive side, it was only 15 minutes from Alex’s house so he had to spend less time in his chair and, thus, more times at the Games. 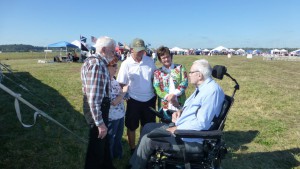 Alex is greeted by Duffey Brown, Judie and Pat Davis and Claire Brown as he arrives at the Games

When Alex and Linda arrived, they were immediately surrounded by many of his fans and friends that had turned out to see him.  As I said earlier, Alex’s voice is stronger than I had heard him in several years.  He was in practically constant discussions with his many friends and still had a strong voice that night.  He arrived in time to hear his friends Jil Chambless, Scooter Muse and John Taylor set at 10:30.  John Taylor surprised all, especially Alex, with a ditty that he had recently written and was playing for the first time titled “Alex Beaton’s Welcome to the St. Louis Highland Games”. 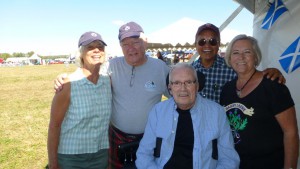 He was constantly surrounded by his friends and told me later that he thoroughly enjoyed visiting with each and every one.  Around 3:00pm Alex and Linda had to leave, her to prepare for the Ceilidh and Alex to rest out of his chair.  (While Alex’s pressure sore has healed, the area is still fragile and can recur if he spends too much time in his chair.  This remains a problem that has prevented him from travelling to many of the games that he would like to attend.) 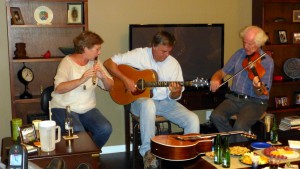 Many of us gathered again at Alex and Linda’s home for his 2nd Beaton Ceilidh.  After a light meal and drinks, we repaired to the living room where Jil, Scooter and John entertained us with many songs including “Rare Old Times”, “The Wild Geese” and “Alex Beaton’s Welcome to the St. Louis Highland Games.”  Alex sang along with most of the songs and I could hear him across the room on several.  (To see a YouTube video of “Alex Beaon’s Welcome”  click here.) 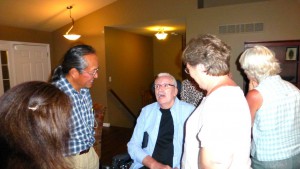 Alex doing what Alex does best

Alex asked for a few minutes to say a few words.  Thirty minutes or so later he was still talking (again showing the strength of his voice after a day of almost non-stop talking).  First he offered his heartfelt thanks and love to Linda for all that she has done.  She has truly been his rock in this long trial.  In addition to thanking all who had come to his soiree, he launched into a detail description of the position and motility of each finger on his right hand.  He explained that his little finger lists to the right because of an injury playing basketball (basketball??) as a youngster.  He also demonstrated the range of motion of this right hand from down and to the right of his chair up to the middle of his chest.  (I would guess it might be a total of 90° of movement, possibly more.  Even I was surprised by his overall range of motion.)

He talked for a time about going through some of his old photographs, including one of his mother, Mary, that was distributed via email recently and the one of him and Ron Eisenburg in their early years.  He recalled the early days post-accident when, shortly after admittance to the Shepherd Center in Atlanta, a large black man, one John Turner, walked into his room singing “Donald Where’s Yer Troosers (Trowsers)”.  He once again recalled the time he time he fulfilled the request of his longtime friend, Georgia McLauchlin to take her ashes to a final resting place at Old Castle Lauchlin at Loch Fyne, Scotland.  And then there was the time his friend, Richard Goodman, convinced several of the distilleries on Islay that they were doing a documentary on Islay whisky.  Of course, no documentary was ever produced; however a chauffeured driver was provided by Bowmore Distillery along with a townhouse with a fully stocked bar of Bowmore’s finest.  As a result, Alex and Richard visited eight distilleries on Islay.  The manager of Lagavulin invited Alex and Richard to his home for dinner where they tasted very rare vintages of single malt.  Naturally they left the home in a painless state.  Thank goodness for the chauffeured driver.  He also spoke of his friend, J. T. McPherson who plagued him with the question “Beaton, do you know any railroad songs?”  (If you don’t know J. T., he’s from upper East TN and it is quite evident when he speaks.) 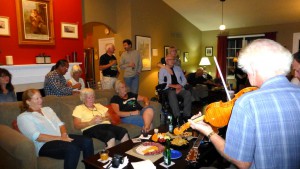 The 2nd Beaton Ceilidh was a big hit

Alex finally decided that, unless he stopped talking, we would be there all night.  He called for a few final songs.  The final song by Jil, Scooter and John was “Tak’ a Dram” which ends with 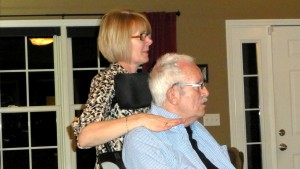 In closing, I must say that I have not seen Alex in as good of a spirit, with a voice strong and clear and the strength to endure that day since well before his ordeal of last year. And finally, as I sat in Alex’s home listening to him speak, I was struck by the fact that every person in that room, many of whom I call good friends, I know only because of Alex.  And that may be his ultimate legacy.

As always, keep the faith,
George

Wonderful, glorious news. Thank you so much for the all the details of this beautiful day. Best wishes to Alex and his friends and family.

Keep the Faith, indeed! Keeping it!Glad to see you are feeling better Alex!
Thanks George for the report and the photos as well as the link to the instrumental. I’m smiling ear to ear.
I’ll keep the Faith, if you’ll

I am an old (literally and chronologically)friend of Alex back in The Sawmill Restaurant Pasadena Calif. days. Just wanted to say Hi and send xoxox lots of love Paula Myers